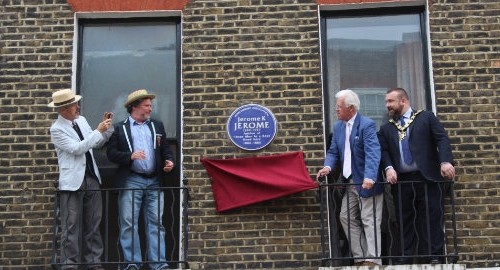 The President and Chairman of the Society joined other ‘VIPs’ on the treacherously narrow pavement of Tavistock Place at noon on 21st May. The occasion was the unveiling of a new plaque commemorating the time that Jerome lived there before he became the successful author we all know and love.

Speeches were made in front of No.32 with the use of a microphone and PA system loud enough for the mercifully brief utterances to have been heard in Westminster. Mr Rhys Jones expressed his gratitude to JKJ for having kept him on the television screens for longer than expected (a whole 7 episodes) while the jovial Mr McGrath tried a JKJ quiz on the audience. ‘What does the “K” in Jerome K Jerome stand for?’ The answer was duly shouted back. ‘And why was he named Klapka?’ Someone started telling Rory it was something to do with a Hungarian general until the President rudely interrupted and told him he was mistaken. ‘And finally,’ the Jerome aficionado asked, ‘what was Jerome’s stage name when he was an actor?’ ‘Harold Crichton,’ said the President promptly. Mr McGrath was crestfallen.

The Marchmont Assocation organised the plaque and the event, having undertaken a great deal of research to establish exactly in which house JKJ lived. There were several candidates. He lived at No. 11 Tavistock Place and he also lived at No. 19. No. 19, it turned out, is now No. 32.

The Chairman of the Marchmont Society, Ricci de Freitas, then invited the Mayor, the President and Messrs Rhys Jones and McGrath to enter the building (now some sort of hotel – though the Ritz it was not) and climb the stairs to the first floor. These were the very rooms in which Jerome lived, though now divided up into much smaller rooms. Cats and not enough room to swing by the tail came to mind. The Mayor and the President stepped out gingerly on to the fragile Juliet balcony on one side while the two actor / comedians went into another room and stepped out on to the balcony there.

By some oversight or mismanagement, the Chairman of the Marchmont Association then asked the President of the JKJ Society to unveil the plaque. Griff looked somewhat astonished but went along with the umpire’s decision and gamely took photos, as did the small crowd below. The ceremony over, the quartet descended the stairs to the relative safety of the ground floor and the pavement where more photographs were taken:

After a brief impasse, it seemed to be time to cross the road where the London School of Hygiene and Tropical Medicine is situated. It was their caterers who kindly provided a very generous selection of finger snacks and some indifferent white wine. The President and Chairman, having conversed with all and sundry, felt not only that had they had quite enough of this social intercourse but that they required a rather more substantial intake of food. A brief consultation followed and they left to hail a taximeter cabriolet which took them to the Garrick Club for a well-earned lunch.

Want to join the discussion?
Feel free to contribute!

This site uses Akismet to reduce spam. Learn how your comment data is processed.